Moore’s Law and the Art of Platform Maintenance 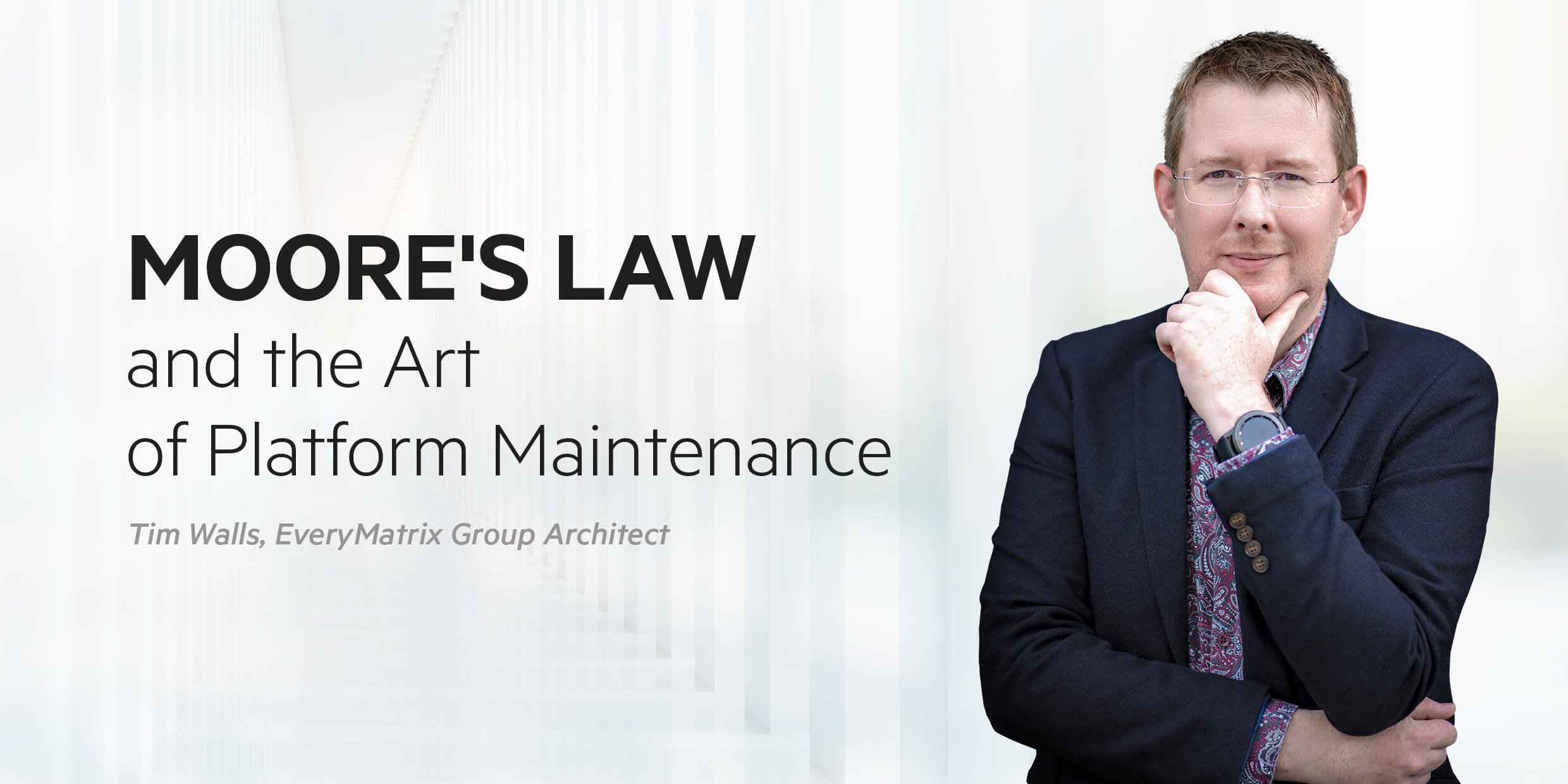 Tim Walls has been the CTO and Group Architect for EveryMatrix since 2015, helping the company to deliver a modular and API driven product suite for casino, sports betting, payments and affiliate/agent management. Having been in the deep tech industry since the ‘90s, he writes about the developments of his field and his work with EveryMatrix.

On my desk, I have a souvenir dating back to the beginning of my professional career – a MIPS R5000 processor board from a mid-90s Silicon Graphics workstation. Apart from being a beautiful piece of engineering in its own right (and a handy paperweight), it’s a useful reminder of how far we’ve come in a few short decades.

The workstation that processor was liberated from was sitting on my desk around 20 years ago, when I was writing the case for the Sun Microsystems V880 servers that were going to be needed if we wanted to keep our betting site running for much longer – servers that cost tens of thousands of dollars each. More than the details of the negotiation itself I remember my nerves as I approached the MD’s office to ask for by far the biggest cheque I’d ever contemplated – but I’m fairly sure it was the phrase “but remember last year’s Grand National…” that sealed the deal.

Of course, since then, names like Sun Microsystems and Silicon Graphics are distant memories, swallowed up by commoditisation. As I write this, also on my desk lies my mobile phone. It’s just slightly smaller than the processor from my old workstation, and with its 2.9GHz 8-Core processor around about twice as powerful as just one of those old database servers.

Truly, we live in a time of abundance when it comes to computing power – if Bitcoin is proof of anything at all, it’s that we have more CPU cycles than we know what to usefully do with. And yet somewhere out there today, someone else is having their formative experience asking for the funds to feed a platform’s voracious appetite for database servers made of pure Unobtainium, and trying to work out what the impact on their license fee will be if they have too many sockets or not enough Processor Value Units…

So, what gives? My mobile phone has enough processing power to process a decade’s worth of Grand National bets in a fraction of a second, but the demand for big iron in our datacentres hasn’t gone away. The answer is that Moore’s Law – the rule of thumb that Intel’s Gordon Moore coined in the 1960s, that the number of transistors on our computer chips would double every two years – has pretty much held up its side of the bargain, but the way it has delivered has changed.

Once, we could reliably expect our processors to double in straightforward processing speed every couple of years – but around 2005 that started to change. The rate of performance improvement per thread started to slow, or in recent years – as we’ve started to understand that power use is also important – even reverse; instead we’ve been using those extra transistors not to do things faster, but rather to do more of them in parallel.

That means the architectures we design today need to look very different to the ones we were designing 20 years ago. It doesn’t matter how many Processor Value Units you’ve licensed if your platform is funnelling every transaction through a single database lock; on the other side of the coin, we now have enough threads to do things that would have once seemed unimaginably inefficient – like processing every transaction through a half dozen different services, each running on its own virtual processor, each separated by a queue or network call.

These changes we have to adapt to aren’t a fad or just the latest way of doing things; they are driven by fundamentals of what we can achieve with those transistors Gordon Moore so generously gifted us. The good news is that by embracing this in our architectures – parallelism and asynchronous execution, paying the overhead of a little extra latency on each transaction, or transforming business rules to work in an eventually-consistent model – we don’t just reap the rewards in scalability, or in not continuing to fund legacy software licensing models: We can also transform the maintainability of our platforms through simpler, easier to understand, easier to develop and naturally redundant components.

Naturally, all change meets resistance – from developers’ unerring desire to optimise unnecessarily or to value the complex more than the simple, to SLAs that prioritise response time more than throughput and in doing so sacrifice both when the top of the wave comes – but it’s our job as technical leaders to rise to this.

Today, we can process more bets in a second on an average Friday night than that old system did on the whole Grand National 20 years ago, not by building bigger and faster – but by building smaller and simpler, and deploying a lot of it. Embrace the asynchronous, and ditch the monolithic database – you’ll sleep better knowing you never need to read another Virtualisation Capacity (Sub-Capacity) License Agreement again.

The original version of this interview has been published in the Winter 2021 issue of SiGMA Magazine under the title All change meets resistance.